At the outset of any lighting design project, we work with our clients to capture the essence of a technical brief and take it to the next level with something that is both imaginative and achievable.

This could mean anything from setting the mood or tone on stage, to a more specific theme for an event, production, artist or brand. 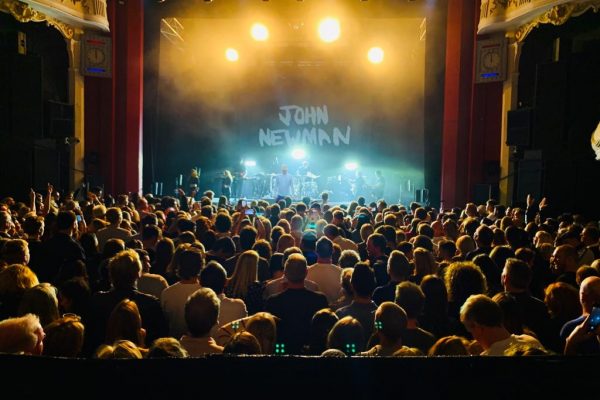 Go-Macro went back out on the road with Mr John Newman, taking a time-coded show and floor package.

This summer we went back out on tour with Mr John Newman, we have been touring with John for a few years now but this was our first production tour with him.  On this tour John was trying new music and style of show, with it feeling a lot more included and intimate with his chats and ‘banta’ with the audience.

When we first chatted to John about the design we decided we wanted some thing simple, eye-candy and separation from the band, all U/S, and John.  I set out working on the design, knowing that we where only going to take a floor package and make do with the house top grid.  I came up with a slightly modular design, making it easy to drop parts off for smaller stages on the tour.

We ended up with a floor package of GLP JCD-1’s and Martin Mac Viper profile, with a couple Martin Rush Par zooms to uplight the backdrop. Using scaff uprights we had a semicircle around the the stage, 3 on each wing and 3 across the back, each with a JDC-1. We also placed 2 more under the drums riser to give another element.  There was then 2 Mac Viper in each wing, 1 set at Johns D/S level and the other set more U/S to favour the band. With 4 more Vipers across the back of the stage, with a large gab in the middle.

The rehearsals and start of this tour landed just before Tuck finished his holidays. so while in LA Volt Lites let him use their beautiful MA3 WYSIWYG suit for 4 days.  Leaving dep LD Jonathan Massena de Camin to step into a brand new production blind, witch he dealt with amazingly, ironing out all the little snags that come with out a production rehearsal.

Our floor & control package was supplied by our good friends at TSL Lighting, providing; 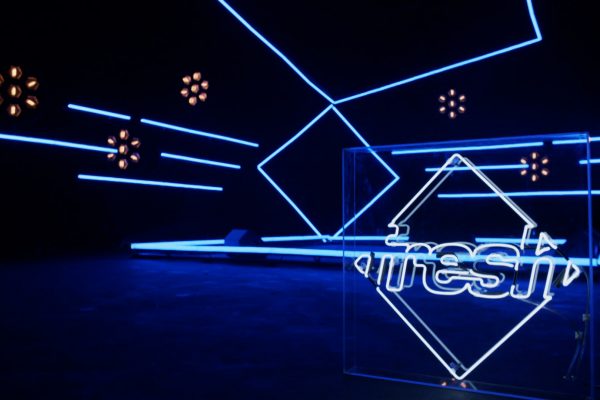 Go-Macro designed the set and lighting for this years Box Fresh Spotlight show.

At the end of last year we were asked to put a design together for 4Music’s Box Fresh: 2020 Spotlight.  A Performance based music show putting the spot light on 4 act’s to watch in 2020.  With the need for the set to be a generic backdrop that fits all 4 artists but the ability to define each artist.

We designed a slick, bold yet simple set to house the musicians as they performed an original & cover track.  Working with Box Fresh’s branding we started working on ideas involving the diamond shape.  After talking to the 4Music production team we all agreed having a header piece was a must for this years show.

We then started playing with a variety of layouts using the diamond shape.  We landed with the 3 diamonds, floor, header and the up stage upright.  I wanted to incorporate a Tungsten look into the design and after chatting with the production team we decided to use Portman P-1 lamps, adding another layer and texture to the design.

Massive thank you to TSL Lighting for supplying our lighting, rigging & technical crew for the 2 day project.

It was a joy to collaborate with the 4Music production team, allowing us to design in our own style but keeping us within their branding and style.  It was broadcast on 4Music and Box Network in 4 parts, with presenter lead interviews inserted around the performances,

The four acts we had this year were  Inhaler, Jay1, Mae Muller and Sam Tompkins. 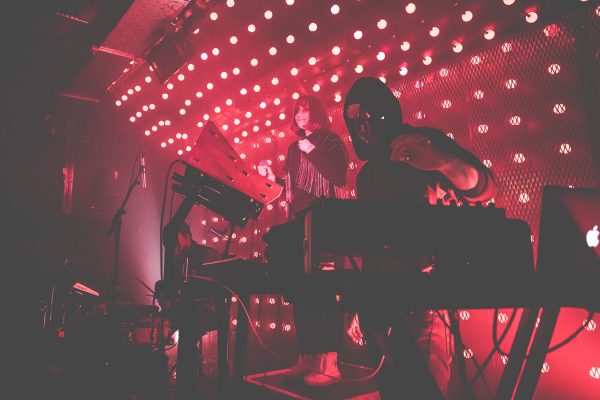 Go-macro began working with Speakman Sound on their first headline performance, resulting in an unforgettable, multidisciplinary performance. Together with director Boris Thompson-Roylance & dancer Ben Smith we created a seamless evening of entertainment from entrance to exit immersing the audience in music, staging, lighting and dance.

The evening was a huge success and we have since partnered with Speakman Sound on all of their live shows as their dedicated Production Management & Show Design Team. 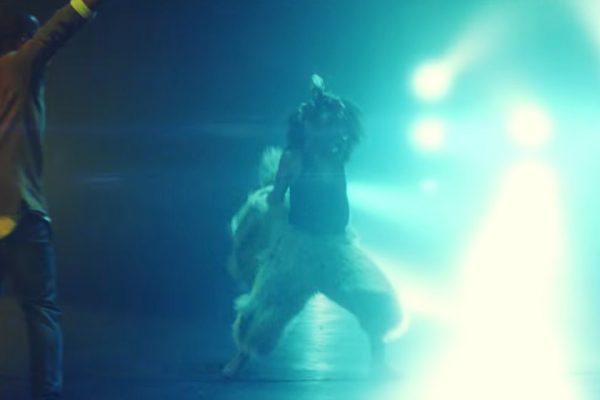 We were invited to collaborate with Director and DoP twin duo Boris and Jack Thompson-Roylance of Dead Beat Films on a promo for London based music artist Shakka. It was to be a studio based performance video, with dance routine, which required a precise programmed lighting design.

The production team requested a lighting structure that fully wrapped around the performance stage, allowing the DoP to shoot in 360. We built a curved wall of sun strips with Studio Duo ACL towers to inject some air effects. It was entirely programmed and controlled by a Road Hog 4. 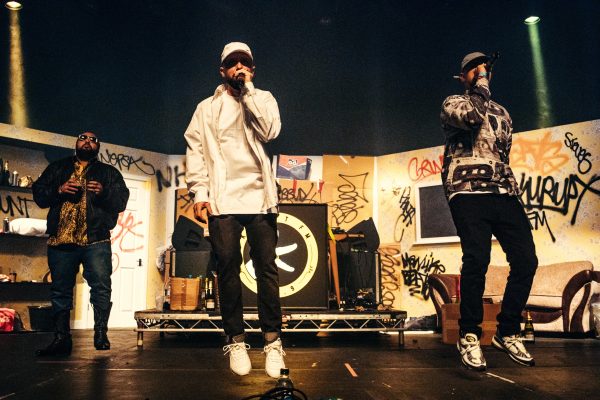 Go Macro was tasked with the creative lighting, set and production design for the BBC and BAFTA winning Kurupt FM's UK tour.

Go Macro was tasked with the lighting & set design creative for Kurupt FM’s UK tour, we designed a mobile set, that would pay homage to the show. The set consisted of a large backdrop that would nod to Steve’s Grandma’s flat and was decorated with Peanut dust boxes, a sofa to relax on, a front door for special guests to enter through and finished with a delightful 70’s floral wallpaper!

Our lighting setup was a basic floor package which would utilise the house lighting rigs at each of the Regional Venue’s on the tour. Our Road Hog 4 lighting desk was the ideal choice given it’s compact size also benefiting from its versatility making it more than capable when used & busked by our show designer Tuck. On top of this we carried a CO2 confetti Cannon, blowing out Kurupt FM £5 Notes along with smaller confetti shots at the front of the stage. 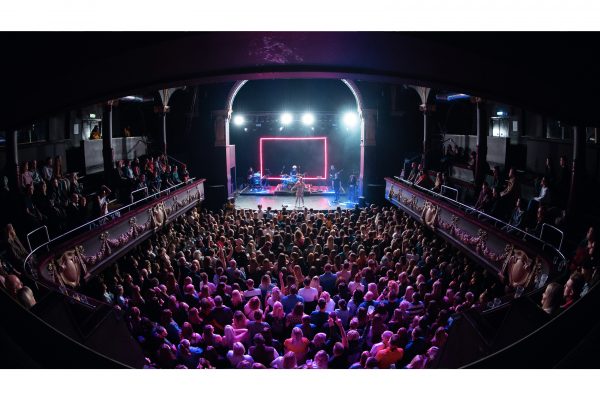 Go-macro designed Becky’s first lighting concept back in November 2016, so we were thrilled to be collaborating again.

Go-macro designed Becky’s first lighting concept back in November 2016, so we were thrilled to be collaborating again. Following on from a previous successful installation, we wanted to build upon this, bringing a new dimension to the show design and video content.

We decided upon a 5 x 3.5m frame with 16 X Astera Titan Tubes creating a rectangle. This was situated up stage behind the band. We also had 8 X Astera AX1 tubes up lighting the band & Becky. These created a memorable, eye-catching focal point for the tour, substituting the need for smoke.

For the London Electric Brixton show we had an up stage screen to fit inside the frame. For this, we teamed up with Director of Photography and Director Jamie Korn to help bring Tuck’s creative to life. Go-macro used a mix of Live Action & Animation to create a narrative-based content package. 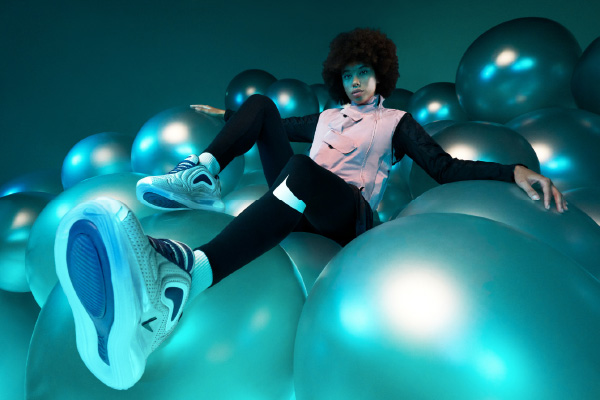 Go-macro were hired by Breaks Agency on the latest Nike and size? social and retail campaign

Go-macro were hired by Breaks Agency to work alongside Photographer Valentin Herfray and Production Designer Lucy Cooper on the latest Nike and size? social and retail campaign. The stills photography shoot marked the launch of launch the new Nike Air Max 720 and required a fresh, youthful and bold visual concept to demonstrate how ‘size matters’.

The creative lighting scheme was designed to reflect the brief. We used Astera Titan and AX1’s LED tubes, which were diffused under the stage to accentuate and match the chosen colour schemes, whilst 5k Tungsten Briese were used cosmetic lighting for shaping and modelling.

It was a pleasure to be part of such a superb team of professionals, whilst working on such a huge and iconic brand. 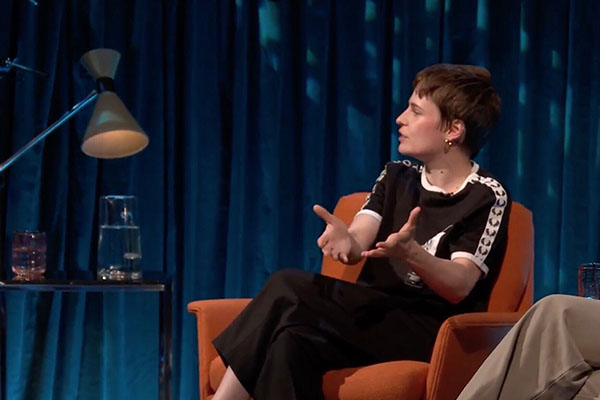 Christine and the Queens

Go-macro were invited to design the lighting for a live Q&A session with singer, songwriter Christine and the Queens

Upon request, Go-macro were invited by Producer Sam Collins – on behalf of Kode Red – to design the lighting for a 1 + 2 live Q&A session in London’s YouTube Space with singer, songwriter Christine and the Queens. We worked with the production designer to seamlessly match the clean cut and slick set in our lighting design, creating a home-from-home, cosy mood that worked beautifully on camera.

How? It begins with our talented team of lighting and audio-visual aficionados who set to work on some disruptive thinking. We get beneath the skin of our clients’ vision and start to understand how we can use lighting and audio-visual effects to influence, enhance and immerse the audience. Using a culmination of experience, together with creative thinking and some technical know-how, we propose cohesive schemes that will compliment the performances and (if desired) leave lasting impressions.

Go-macro has worked with brands, agencies and production companies to deliver and execute a multitude of live audio-visual concepts, ranging across the board from live music events to television, film, conferences, promos and awards ceremonies; each time bringing a creative, professional approach and a good attitude. We are well versed in end-to-end management of the staging, rigging and setup of a production, as well as fully crewing and executing the programme with a reliable team of technicians.

Whist we have worked with various sized budgets, our fundamental aim remains the same – to engage audiences with unforgettable experiences and complement the performance in a way that will have an immersive effect and a lasting impact.